Let Me Tell You A Story, About My (Travel) Life in A Decade (Part Three)

If you are asking me “How come you can become a travel writer?” maybe I can answer that with another story about my life, back in my childhood. Dad was a researcher, and he used to write many things before he sleeps. Things that is related to his work as civil servant, of course, not things that can make him rich. Mom was also a civil servant, but she does not like to write –frankly, her handwriting is uglier than Dad’s, literally and figuratively. Her hobby –yes maybe you can guess, is traveling, or not staying at home.

Almost every weekend she asked Dad to go to Semarang, go to the mall, and I, as the minority shareholder in the house, had no option but to follow them. I remembered a time; I was in elementary school,  when I went to Semarang from Ungaran with my parents, using a motorcycle named Suzuki Crystal, back in 1992. I was a rainy day at the way back home, and I was sitting in the middle, with my Dad in front of me, and my Mom sat behind me. Facing forward, of course. When the rain got heavy, Dad stopped at the sidewalk, and wore the big brown raincoat before continued the journey. Dad used the frontside of the raincoat as a shield, and Mom gripped the backside of the raincoat, pulled it to her back, to protect me from the rain. Sometimes the rain drop into my feet, it was supposedly cold, but somehow, I feel warm inside. It was the love of my parents that kept me warm and also gave me shiver every time I remember that moment.

I grew by watching Dad writes and Mom travels, I learnt how to do those things from them. Dad always spends the night in his desk, writing, never sleep early, but always wakes up early to go to the mosque. Okay, the last part is not so me, now, but the passion for writing, umm, I think I got it from my Dad. Mom taught me about the pleasure of traveling, the enjoyable feeling when you are outside, leaving your comfort zone to experience new things. If you think that my parents is a great combo, think again, because sometimes Mom got mad at Dad, because he was too occupied with his writing things in the weekend. Yep, shopping schedule.

Read my previous story, about my (travel) life in a decade (part two)

“Interesting, tell me more, about how do you fund your trip?”

“Chill, you can read it on my previous post here: Jalan-jalan Terus, Duit dari Mana? I hope it can enlighten you.”

Traveling, for me, it is one of the coolest way to spend the money. The other way, is called marriage.

After having more than ten years of traveling experience, I could say that marriage is my longest journey –also the most expensive one, ever. A journey with no way back, a journey that (should) never ends. A marriage, for me was started with a pre-wedding trip, before continued simultaneously with registering the documents, preparing the venue, doing the marriage itself, and finally … experiencing the first night moment. Yes, you can read more posts about my marriage story there.

But, before that, you have to meet the right (or wrong) one first. For me, I met this beautiful lady called Poetry Gladies Karina Dewi back in 2012, and married her in 2016. Yes, beautiful, just like marriage, at the beginning. 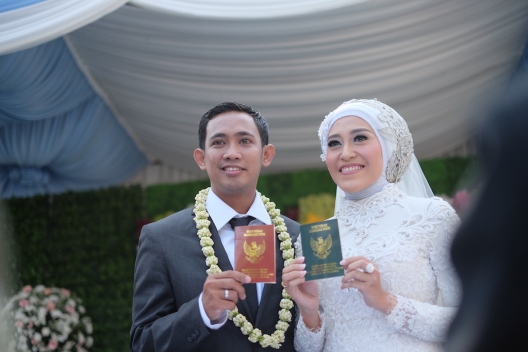 For me, marriage is about a compromise and adaptation. Compromise to your partner, and adaptation to a situation that you have not experienced yet. Imagine, living with stranger for years, adapting to his/her habit and childhood wound, and compromising things that might be against your norms. If I must say, marriage is not for everyone, and marriage nowadays is more complicated than in our parents year. But thank God, I have survived five years of it, and hoped that I can continue it until the end.

Some people might think that marriage is a solution or an answer from a question like “Kapan nikah?” with some additional informations like “Teman-teman kamu sudah pada menikah loh.“, “Mama sudah pengin deh gendong cucu.”, or “Masa sudah 30 tahun cuma dipakai pipis doang.”, but believe me, marriage might be a solution or an answer for that problem –but marriage is also a front door for another problems. Financial and romance for example.

You can follow my path if you want, but I have warned you about this longest journey called marriage.

2017 – As A Traveler, I Challenge Myself to Do Crazy Things

Thankfully, my marriage did not prohibit me from doing something that I really love –besides eating, traveling. In 2017, I already visited more than 25 countries in the world, if I am not mistaken, well you know, marriage brain. At that time, I asked myself, what should I do next. Should I visit every countries in the world? You know, I want it too, but my bank account would be laughing hard at me. As a employee, I had limited annual leaves, but as a traveler, I really needed a new challenge.

So, I talked to myself “Hi bro, how about we visit another country –or countries, every month this year?”

“Nice idea, bro.” I replied “But how about our bank account?”

So, based on that imaginary conversation, I visited 18 countries in 12 month of 2017. I spent all my annual leaves that I had saved from year before, and sometimes I went abroad in the weekend only. Imagine, visited Taiwan in weekend, or visited Spain and France in 5-days trip. Crazy things that I should do as a employee, who like to travel a lot. In the end of 2017 I realized that I had spent a numerous amount of money, an amount that could buy me an Avanza at that time, or an amount that if I put it all in stock market or bought bitcoin in 2017, I could be rich now. But you know, most of people were young, dumb, and broke. Same like me. But I was happy at that time, because I could do crazy things that I never done before.

During those crazy time, I met this person (who traveled with dozens of his colleagues) in one of my memorable journeys in Georgia. 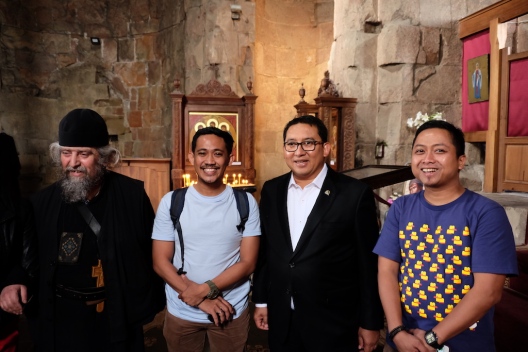 “Kamu ngapain sampai sini?” Asked one of them to me. A question that I should asked them back, as a taxpayer. “Enak ya kerjaannya jalan-jalan terus.”

One of the perks from being a travel business owner, is, you can travel for free, paid by the company. Another perk from owning small business (at that time) was, we can manage the budget by ourselves, since only three people at the beginning of Whatravel, and we did not need to pay the employee’s salary. All the profit was divided by three, for us, equally. It was cash at first, until one night, when we discussed about the future of Whatravel by Whatsapp, and I multitasked myself by opening another application named Skyscanner.

“Guys, there’s a cheap ticket to Nairobi.” I told them as I scrolled the flight dates on Skyscanner. “Should we go to Africa?”

“HOW MUCH?” Asked them simultaneously.

“It’s 5 mio-ish per person, depart from Kuala Lumpur.” I replied vigorously. “We can go there to open an opportunity making an open trip to Africa. Also, we still have budget to buy the ticket, for three of us.”

Long story short, we went to Africa in 2018, and that was because we own the travel business. It is like the song. Just the three of us, we can make it if we try. 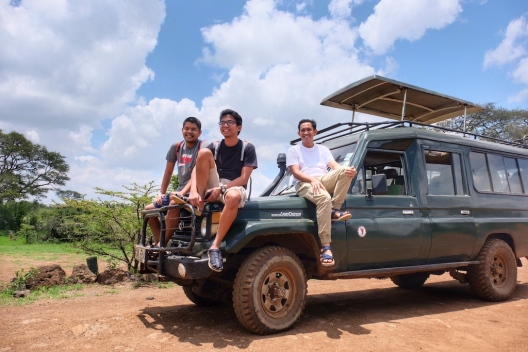 Traveling to Africa in 2018 was my first attempt to explore the dark continent. We went to two countries at that time, Kenya and Tanzania, also opened up a collaboration opportunity with local partner there. Too bad, it had never been realized because of the pandemic, but at least we have connection there, just in case we need something in the future. For me, investing connection, is a new gold mine in this internet era.

From my first visit, I could say that Africa is a beautiful place to visit, I even said that Doing safari trip in Ngoro-ngoro Crater is one of the things that you have to do at least once before you die. If God will, and I still have time (and money, of course), I plan to visit more countries in Africa, and experience more beautiful thing –like watching where gorillas live in Uganda, meeting indigenous tribe in Ethiopia, or even climbing the Nubian Pyramids in Sudan.

At that time, I have visited Asia, America, Australia, and Europe, but no places in those continents like Africa. Africa is different place that always calling me to explore more things there. But of course, I want to visit South America too, Ojalá!

People plan, and God decides. I planned to explore South America, but God came to me with one of the greatest surprises in my life –well you know, I hate surprise, Aquarian hates surprise, but not this one. After three years of marriage, my wife gave birth to a wonderful baby boy. A baby boy named Prabu Panerus Kabecikan. I chose the phrase ‘Panerus Kabecikan’ because I wanted him to be a man who can spread kindness to the world, while ‘Prabu’ –means King, was given by his grandpa, because I could not decide what is the suitable first name for this kid.

Hopefully, the name would suit him well. Well, at least he would not got any issues when visiting another countries with Islamic name, like his father. 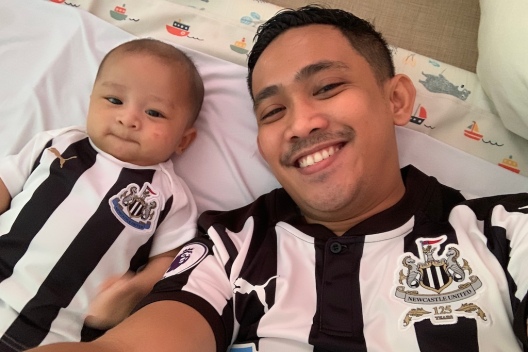 Having a kid, had slowed me down a bit. The year 2019 was different from years before –when I put all my mind to travel the world; this year I (((only))) traveled to North Korea, Singapore, Morocco, Spain, and Qatar. The rest of the years, I chose to explore places nearby home on the first semester, where Bandung is our furthest place, and exploring more places in second semester of 2019, along with starting my YouTube project called Datang Senang Pulang Kenyang.

After a decade of traveling, I think that traveling has changed me into a better me. I gained my confidence by talking to thousands people along the way, I improved my English skill by meeting people all over the world, I broadened my knowledge by listening to many stories, and many more, just like the bottom of a concert poster. I was broke, financially, but I got rich, spiritually. Like a saying: Traveling is the only thing you buy that can make you richer.

By the end of 2019, I was still thinking that I could be richer with these travel things. Then in 2020, corona said hello.

This site uses Akismet to reduce spam. Learn how your comment data is processed. 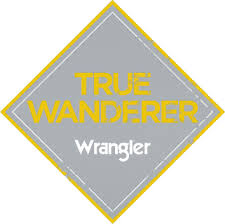 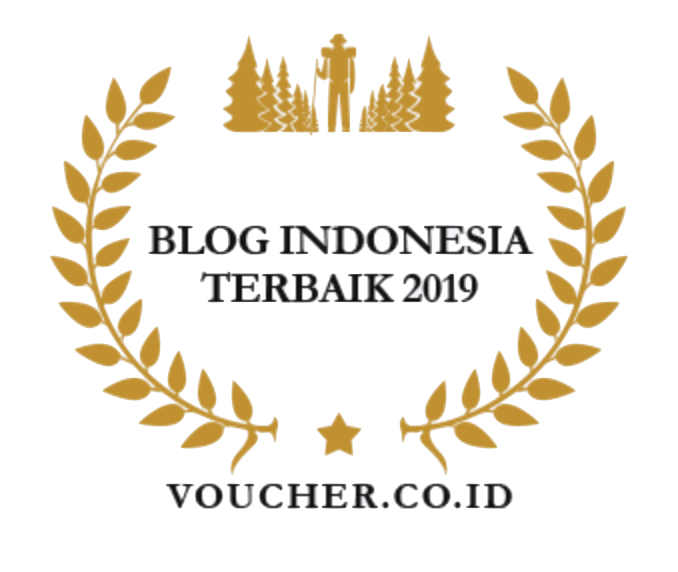 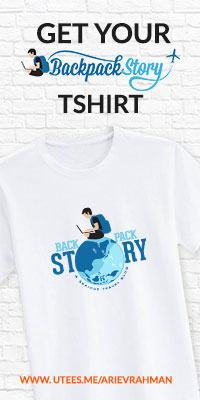 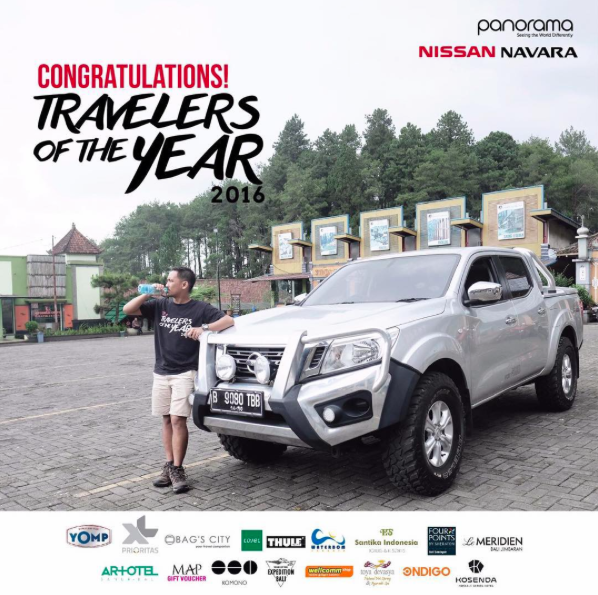 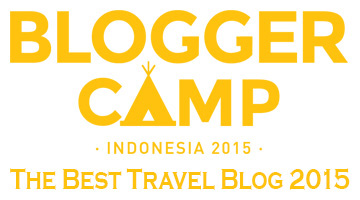 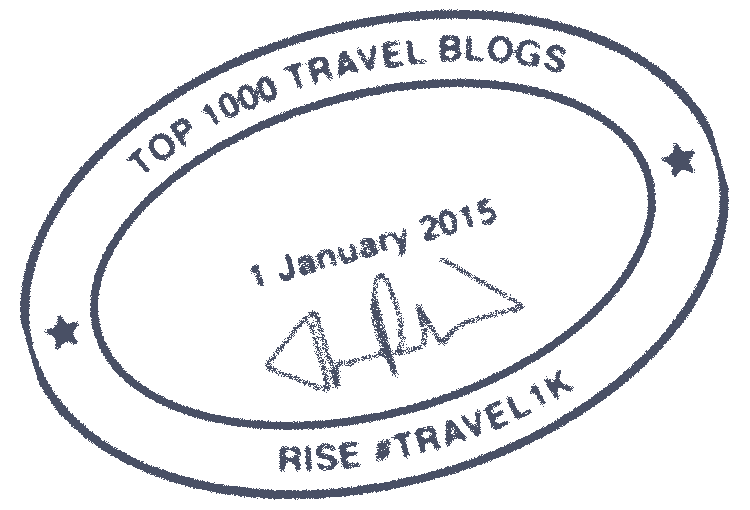